after my exciting morning jaunt (inauguration part I HERE) there was nothing that could keep me from the streets of DC today! bearing in mind the frigid temperatures, we purposely set out late – walking west from chinatown along F ST. the street vendors were out in full force like i’ve never seen – since the streets all around the mall were completely closed to traffic (blocked sporadically by parked metro buses!) they were filled with vendors peddling every type of souvenir imaginable! buttons, boas, hats, puppets, posters, calendars, blankets, and more were auctioned to the thousands passerbys. cutting north to avoid the parade route (sectioned off by heavy duty fences + concrete barricades) we passed the white house and st john’s episcopal church where the obama family attended service this morning. since i knew the mall was closed east of 14th st (filled to capacity!) we pressed on to the lincoln memorial and walked along the mall toward the washington monument. massive jumbotrons displayed the arrival of all the dignitaries of the day and music blasted from the speakers. we positioned ourselves in front of one of the big screens just west of the monument and awaited the start of the ceremony. my goal was not to be as close as possible to the action, but rather just be part of the moment. i loved observing the event amidst a ridiculous mess of enthusiastic people – it was perfect!

the weather was freezing. the crowd was massive. the excitement was palpable. and when barack obama appeared on screen people went wild. i stood shoulder to shoulder with my fellow americans, watching as america inaugurated our 44th president. the chanting of “O-BA-MA” and the clicking of thousands of cameras ceased as he took the stage. collectively, we listened to president obama’s inspiring words – an 18 minute inaugural speech that moved people to tears. and brought about waves of cheering and clapping from an emotional audience.

like so many people, i am so grateful that i was able to be a part of this day. i am prouder than ever to be an american and i am hopeful + optimistic about the future.

thank you president obama, and welcome to dc!

a great day for america and for the world.

vendors out in full force! 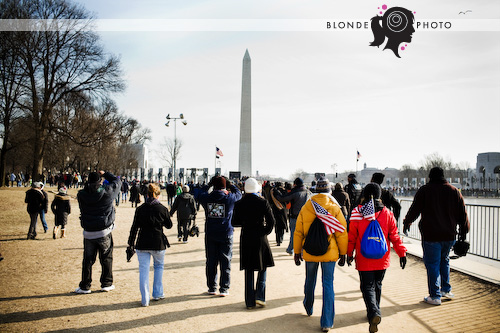 steadily streaming along the mall.

the inaugural ceremony shown on one of the 20+ jumbotrons positioned along the mall. 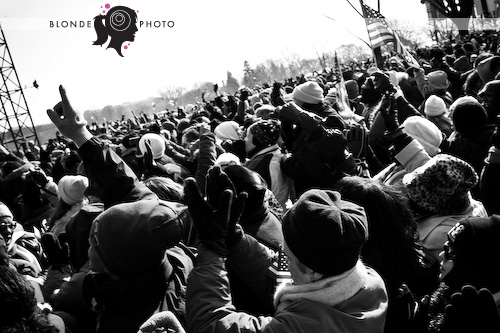